As more refugees and asylum seekers arrive in Edinburgh, many brilliant initiatives have sprung up to provide a welcome across the city. As more groups are stepping forward to offer help and support – from providing bikes and language lessons through to advice on navigating the education and health system – the network becomes wider but more difficult to visualise.

So how do we know about all of the good things that are available or who’s involved or what each others’ plans are? How do we signpost people to the right place or ensure that we’re using resources wisely by avoiding reinventing the wheel?

As importantly, how do identify what isn’t yet happening and make collective decisions, as a city, about the best way to work together and fill those gaps?

One of the ways to start answering some of these questions is to get people together and create some space and time to have a conversation about this. Which is what an emerging Edinburgh City of Sanctuary group helped to coordinate in November 2016 – an event that would bring a group of around 100 people together to map out what is already happening, consider what needs to happen next and work out the best way to develop co-ordinated approach across the city. 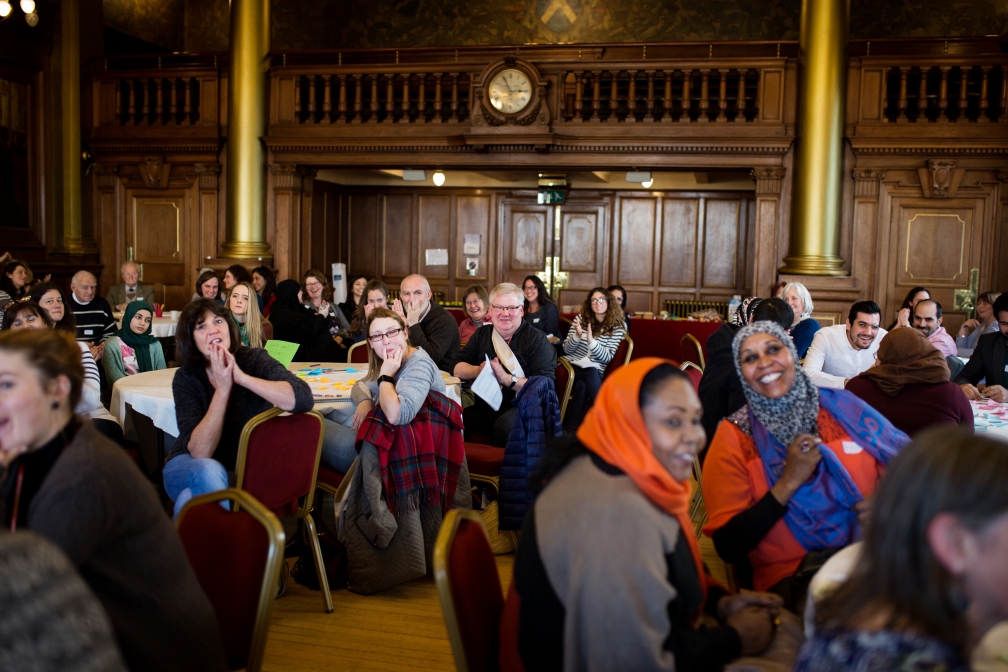 We structured the event so that people could shape the priorities according to the conversations on the day, not on a pre-determined agenda. The main thing we wanted as an outcome was the beginning of a map of sanctuary offered by Edinburgh – a set of data based on local knowledge that is available to all, to ensure better signposting and a better picture of what’s on offer and what’s missing.

Here’s how it went.

We began by inviting participants to introduce themselves to each other. They drew wonderful pictures and wrote their thoughts on what a welcoming place meant to them. It’s a great way to quickly say hello, compare artistic skills and start with some smiles… 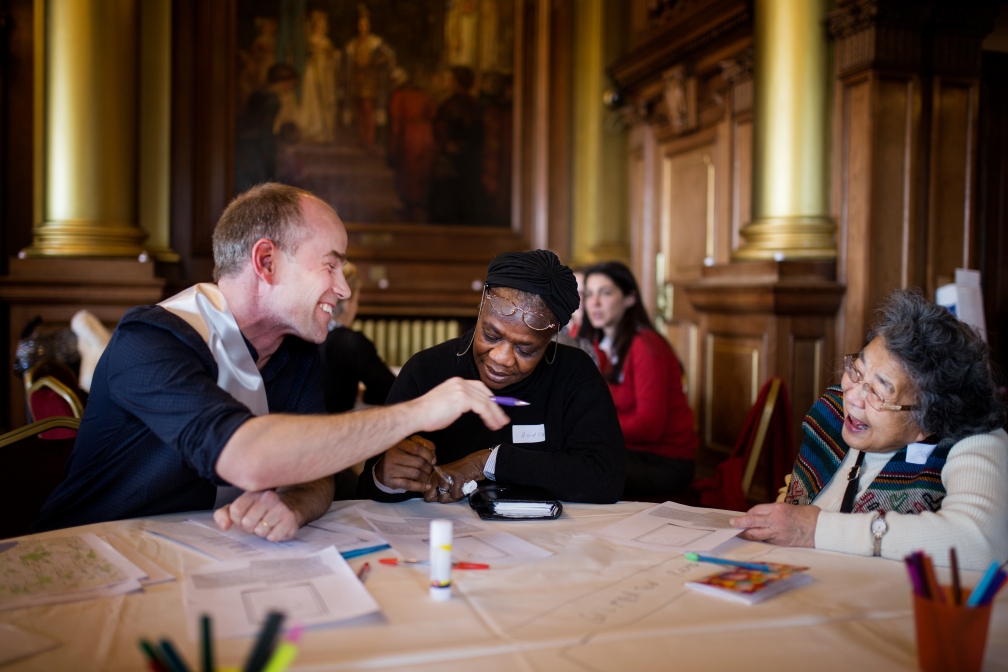 We then worked together to draw a collective picture of Edinburgh, mapping the resources we know of in different parts of the city – some that are specifically focussed on supporting refugees and others that make up a supportive, vibrant and welcoming city for everybody.

Ten tables, each representing a part of the city, hand-drawn maps, not exactly to scale and plenty of creative tools to play with… 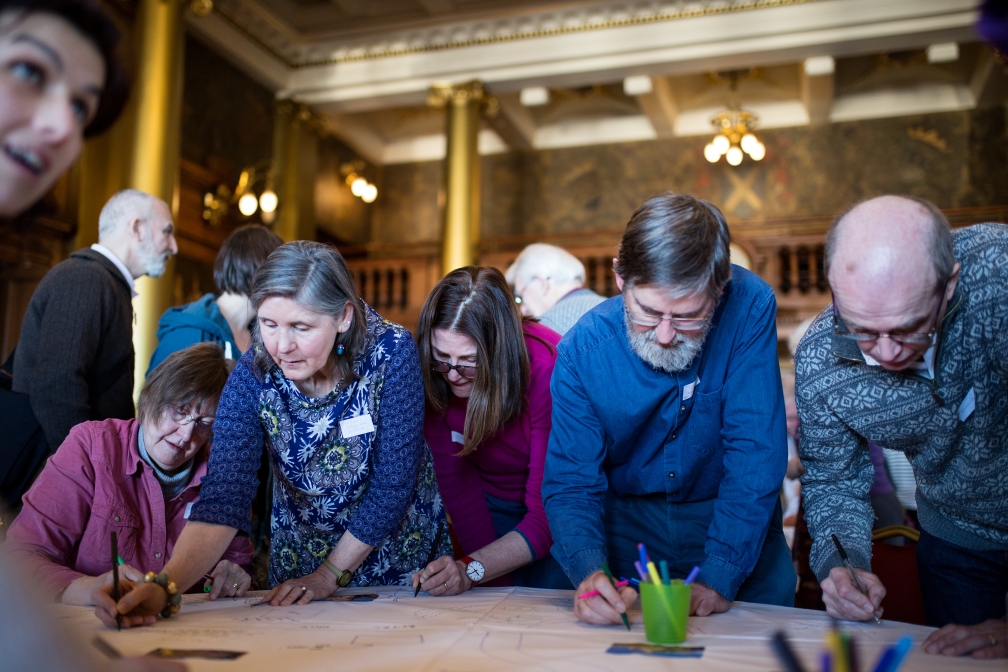 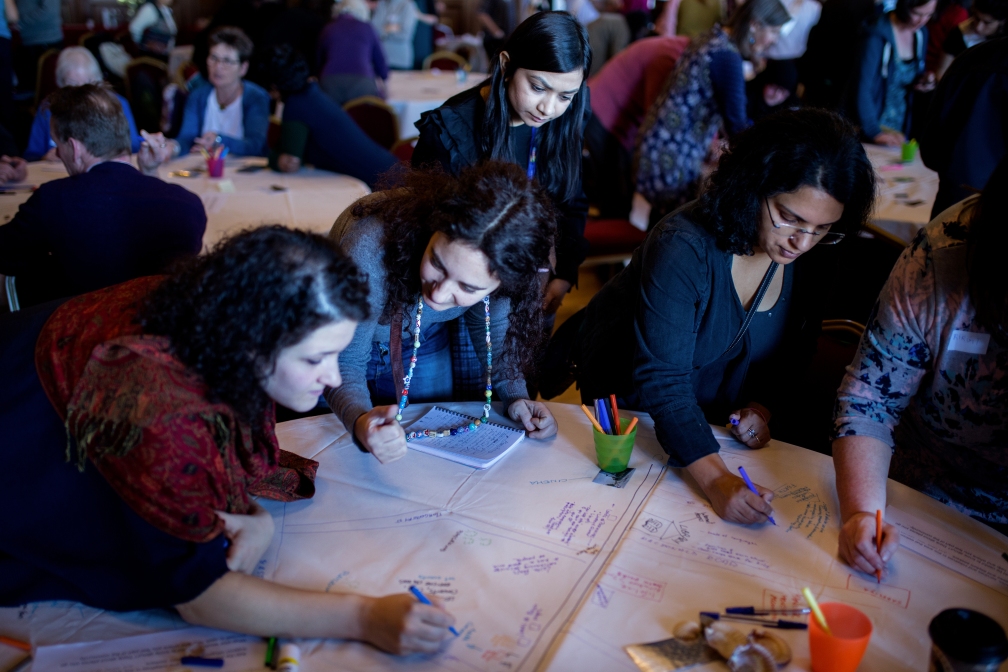 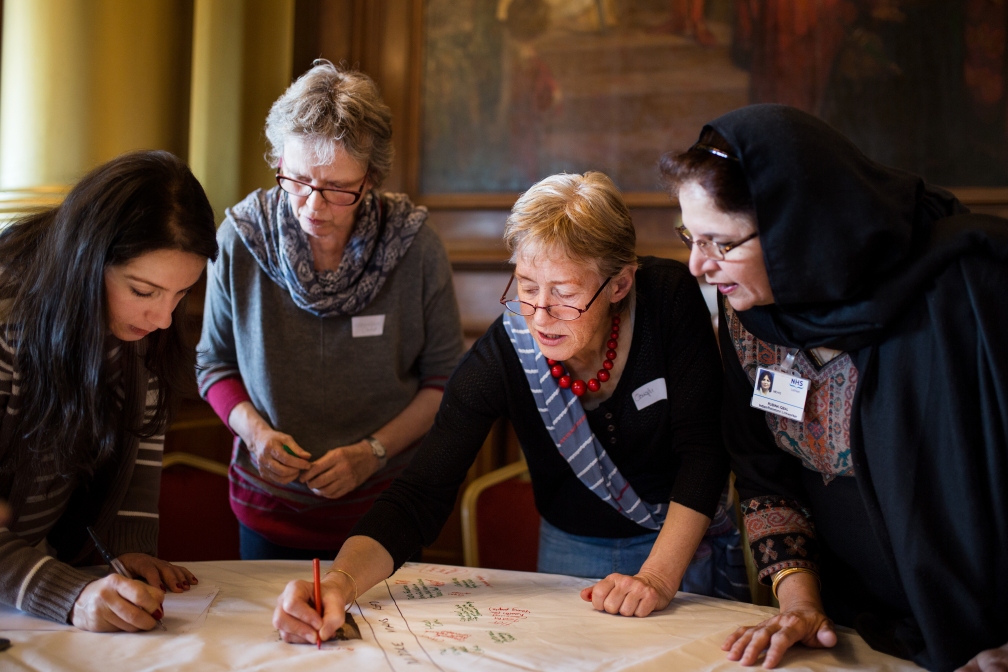 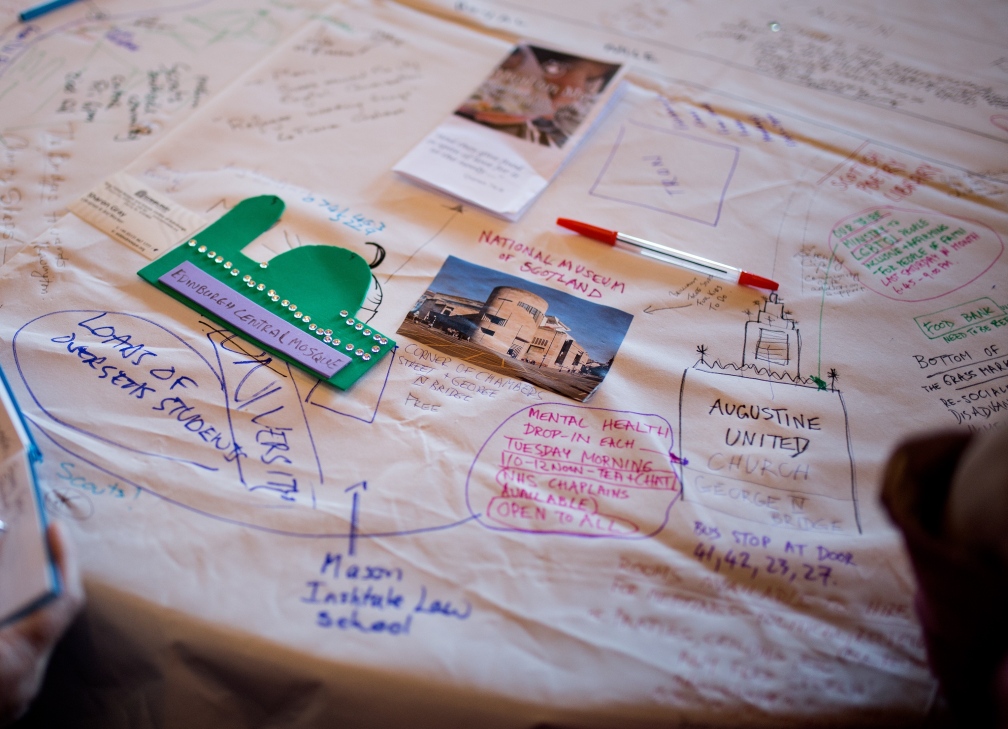 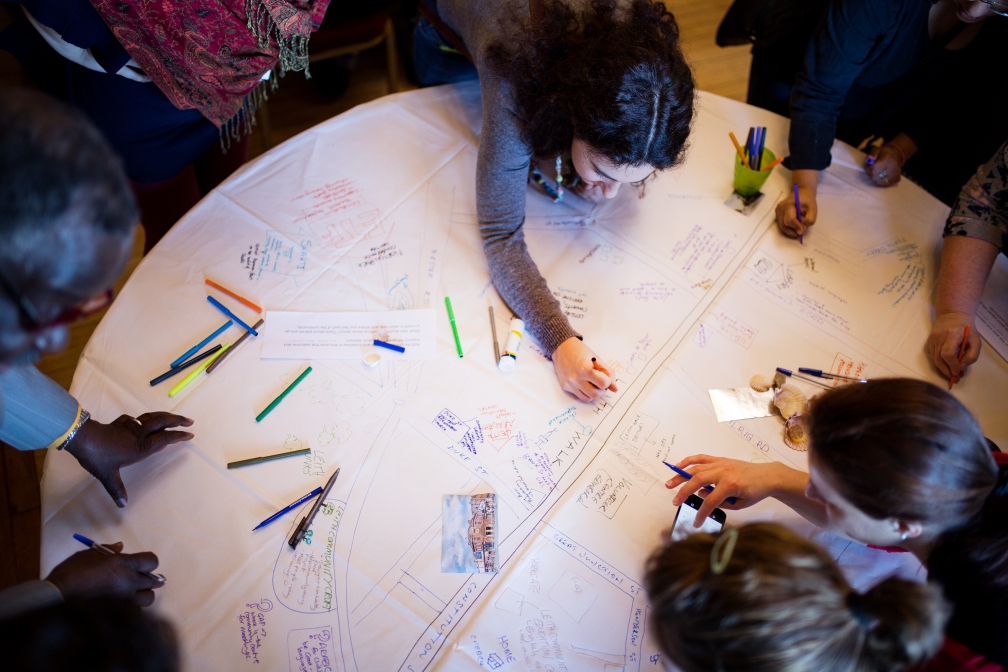 The maps were lovely, the emerging data was just what we needed …but it was the conversation that was key. We could only start to talk about how to work together if we had a chance to meet each other . 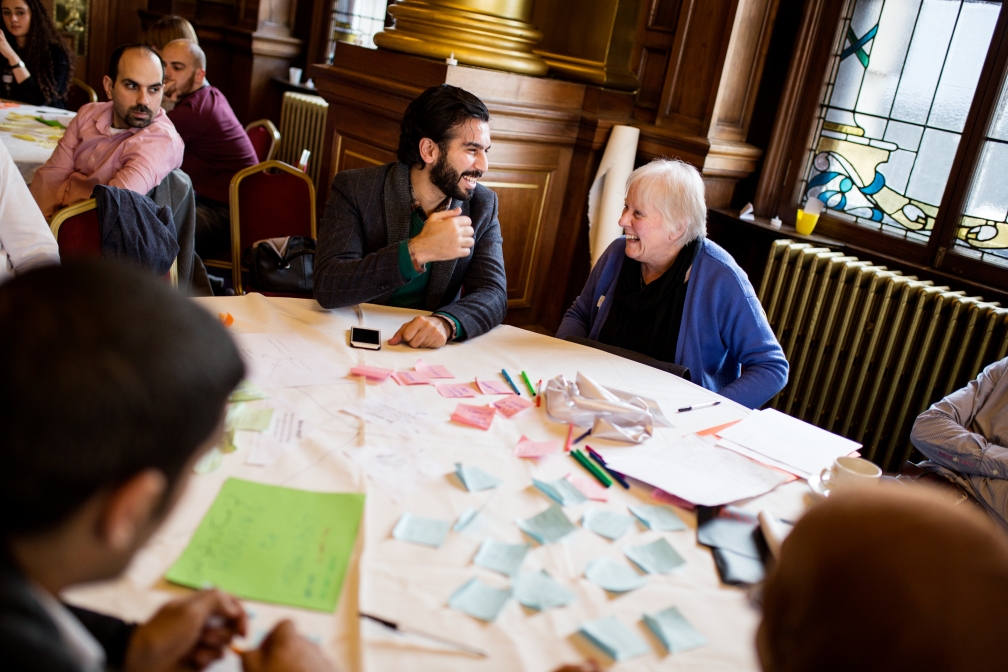 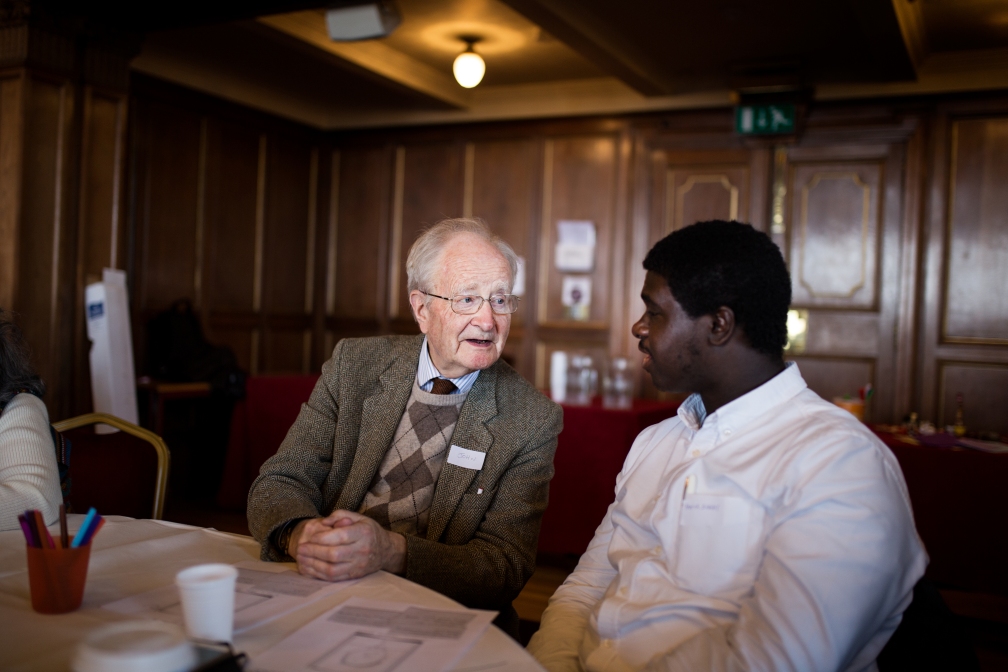 Towards the end of the mapping session we paused, regrouped and thought about the emerging themes in each area. What did the pictures tell us? what was good? what could be better? what had we discussed with our new contacts?

After some reflection on this, each table quickly shared their top two or three priorities which we would then use to inform the discussion themes for the afternoon. 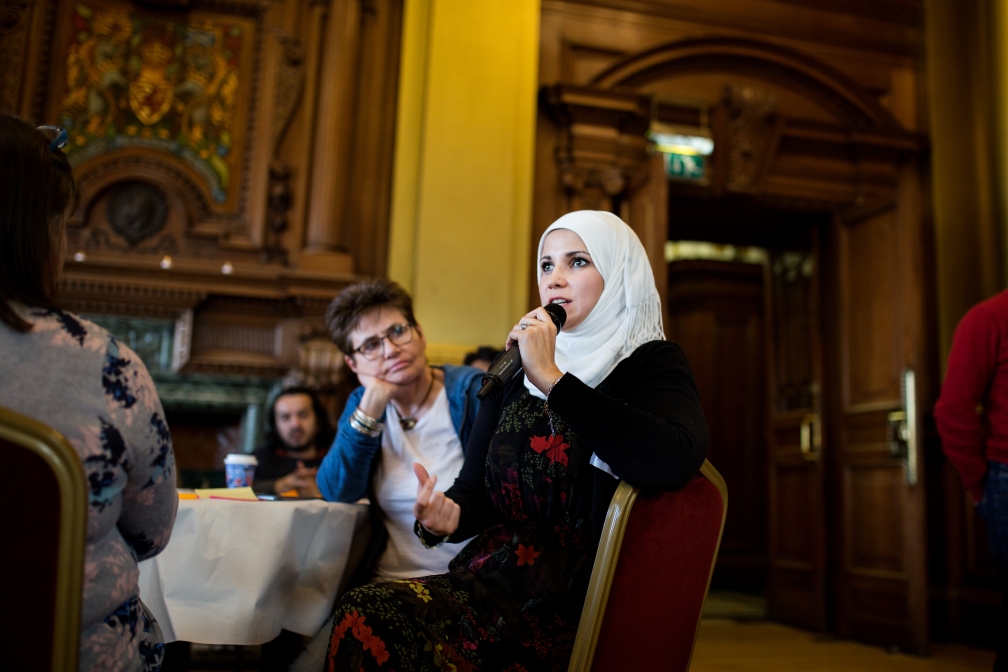 Thanks to our skilled facilitators and a focussed process the discussions were short and productive. We used the three ‘Whats’ structure:

1. what are we talking about here?

2. So What? why is this important to consider and

Ten minutes on each, everybody getting a chance to contribute in writing or in discussion. It worked well and groups came up with some immediate actions…

We were seeing the beginnings of people linking up around particular themes – Universities, Health, Schools, Sport …  these could evolve to be “Streams of Sanctuary” if people are willing to make them happen.

We finished up with a general discussion about how to take things forward generally, together. City of Sanctuary Edinburgh can act as a network, a community connector and a hub for information about the great work already happening, but it can’t ‘own’ these streams of work emerging. There seemed to be agreement for this approach in the room.

Whatever we do, we’ll continue to work collectively, as we did on the day – with local Government, third sector organisations, faith groups, local businesses, the technology community and Edinburgh’s citizens.

Most importantly, everything we do should be informed by and taken forward with refugees, asylum seekers and others newly arrived in Edinburgh. We were delighted to welcome some of the local Syrian and Sudanese community who brought new perspectives, ideas and vital local knowledge, making the event so much more effective, the conversations so much richer.

We’ve learned a lot – both from the day itself and also from planning the event. We think it could be a useful process elsewhere so if you’re interested in hosting something like this then please get in touch.

Thanks to everyone who helped to make the gathering happen including the City of Edinburgh Council Refugee and Migration Team who kindly hosted event, our wonderful translators and facilitators who ensured that everyone could contribute and have a voice during the day and to Emily McInnes for taking many, many fantastic photos for us, a few of which you’ve seen here.